Rectal bleeding is not lethal. However, it may indicate some serious underlying conditions like rectal cancer.

The following conditions may be related to rectal bleeding.

The fistula is an abnormal burrowing channel from the rectum to the skin around the anus.2 Usually, a white discharge oozes out from the opening, but rarely, bleeding may start from it. A fistula may be associated with chronic inflammation or Crohn's disease.

Hemorrhoids or piles are the build-ups of swollen vessels and muscle fibers in the rectal area. These can be external or internal. Internal hemorrhoids are not painful, but they may cause bleeding.3

These are pockets that protrude from the bowel wall. They balloon out over a period of several years due to recurrent high pressure in the rectum. On rare occasions, diverticulosis may lead to heavy bleeding which requires hospitalization.

Either the rectum or colon can be inflamed. Multiple disorders may cause the inside surface of the bowel to bleed. There may be rectal urgency, diarrhea, or cramps that may lead to rectal bleeding. If inflammation is restricted to the rectum, it is called proctitis; if the colon is involved, it is called colitis. 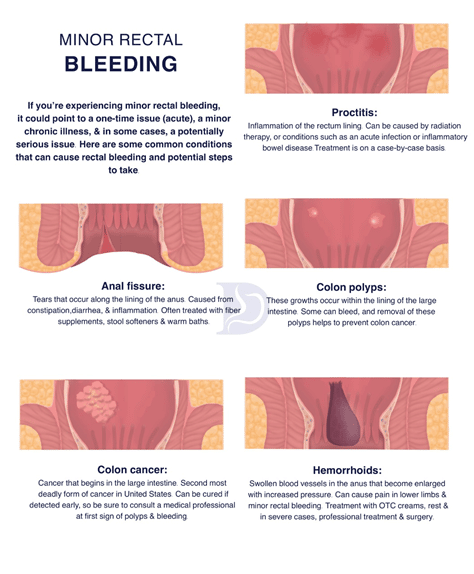 Polyps are small benign growths in the colon. When polyps increase in size, they bleed. Certain types of polyps can turn into cancer. Colon cancer is curable at an early age. In older adults, colon cancer is a common condition leading to rectal bleeding.

Rectal tissue weakens in older adults, which may lead to protrusion of the rectum anus. The protruded rectum can be a source of rectal bleeding. This condition is called rectal prolapse.

Certain other rare conditions may cause rectal bleeding, like vitamin K deficiency, hemophilia, and thrombocytopenia.

How does rectal bleeding appear?

The color and consistency of blood may indicate the source of bleeding.

Age, sex, color, frequency, and extent of the bleeding can be important. Eating habits and constipation should be considered. All of these factors may provide clues, but advanced tools are used for a positive diagnosis.

A barium enema is a complementary exam that uses liquid barium inserted into the rectum. An X-ray highlights tumors, benign growths, and diverticuli.